Kingdom Death:Monster and the Power of Story 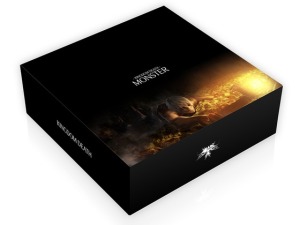 You might have missed it, but yesterday on Kickstarter a board game called Kingdom Death:Monster successfully funded at at 2 million dollars.  On a pledge level of 35 thousand dollars.  That’s flat out amazing.  Very few games come close to that kind of response from the community, so why KD:M?

Part of it is the presentation and the art.  No exaggeration, it’s some of the most imaginative and detailed stuff out there:

But it’s not universally loved.  In fact, one of the biggest complaints about the artwork is that the female characters are highly sexualized and, um, clothing averse.  The men are as well, but not at the same level.  Think anime volleyball team.

Another part of it is the fantastic selection of goodies available when you pledge.  Check out this chart to see what I mean.  Not only is there a generous volume of rewards, but the variety is terrific for a game, as opposed to a collection of miniatures that doesn’t need to worry about mechanics.  It’s not up to the insane levels of, say, Zombicide, but it’s very good.  It is not, however, good enough to carry the project to two million dollars on its own.

There’s also the gameplay.  This is a cooperative miniatures game, so right off the bat you have an idea of how it will play.  There are a couple of nice twists, like the AI cards that not only drive a monster’s behavior, but also count as its hit points, which means the more wounded a beast becomes, the fewer tricks it may have up its sleeve.  Of course, you may also whittle it down to only it’s most powerful attacks, which is also pretty cool.  Here’s a peek at the gameplay:

Again, very well done, but not too much you haven’t seen elsewhere.

So what is it?  What resonated with over five thousand backers at an average spend of $200 dollars each?  It was the story.  Go to the Kickstarter page and watch the video.  It’s not about the mechanics or the cool figures or anything remotely board-game-like.  It’s 100 percent about facing monsters in the dark with nothing but a shard of rock.  There’s nothing but a tiny group people with no knowledge, culture, or industry to fall back on, standing back to back against the unknown.  That immediacy and intimacy, coupled with the extreme vulnerability of the heroes, is where that two million dollars comes from.

It’s the pure essence of a great horror story.  The trappings of art and rules and miniatures simply make it possible for us to see how we would be able to be part of the story ourselves.

That’s something I’d gladly pay for.  And I did 🙂

Read more from Blog Posts, Gaming
← Not In My Back Yard
Today is for Dog Pics →