We Hear What We Want to Hear

Are people crazy?  Kind of.  Confirmation Bias is something we all have, but few recognize or actively try to compensate for.  Basically, we tend to seek out information that reinforces our beliefs, and avoid or discount information that goes against them. I call this Football Team Syndrome.  If we screw up, it’s your fault, if you screw up, it’s your fault.  There was a time when this was a pretty clever strategy, keeping people centered in the tried and true tribal knowledge that kept them in food and rabbit pelts, and away from that guy who always claimed that bears were full of delicious candy.

Today, this tendency is easily and gleefully exploited by political parties who know that lying in an ad won’t hurt them with the faithful, and might just sway the fencesitters.  This is why you can hear the most absurd, outrageous things in a commercial or a speech, and at the same time see people in the same room nodding to themselves in satisfaction.

We all have confirmation bias, it’s just how we’re built.  But having it doesn’t mean that we can’t overcome it.  Seek out information about the other side and think about it.  Be skeptical on an item by item basis, and consider the source based on past performance, not affiliation, and when in doubt, check with less biased sources like factcheck.org.

Critical thinking is the single most important part of personal independence.  Enough people are working day and night to manipulate you, don’t help them by fooling yourself.

Why Do We Overspend in America?

Take a look at this: 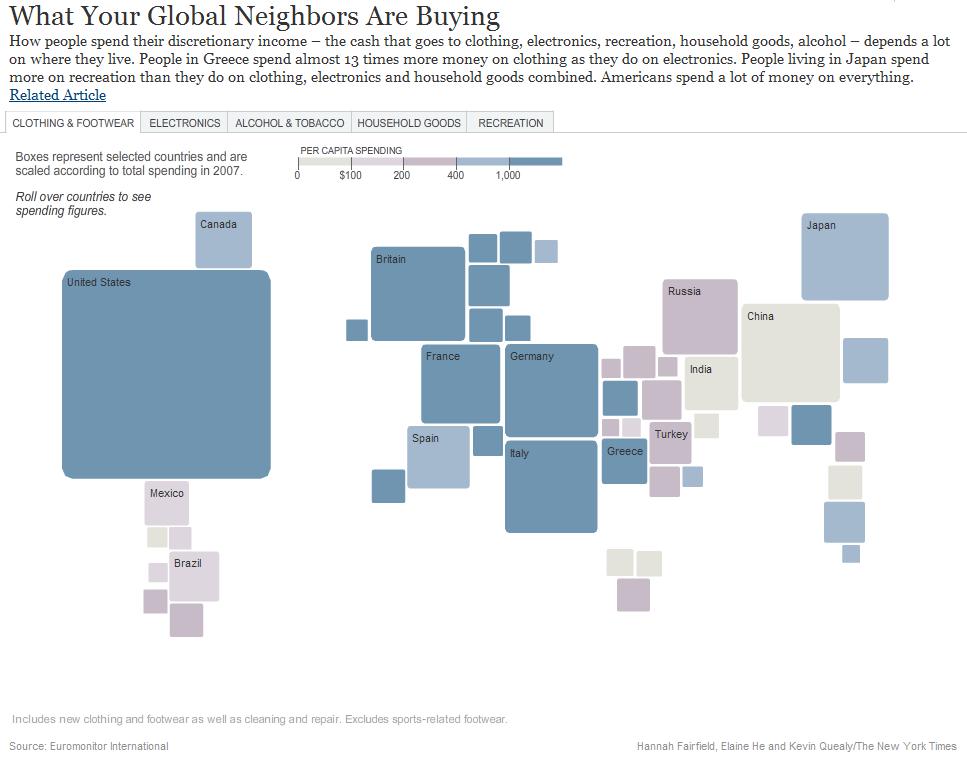 Clicking on the image will take you to the flash app created by the New York Times.  What it shows is the per capita consumer spending habits by nation, divided by country.  The bigger the block, the bigger the spend.  Click through each tab, and you’ll notice that we Americans always have the biggest block.  We spend more, per person, than anyone else on everything.

We see an average of 1600 ads per person every single day.

I know, right?  Maybe it’s more amazing that we don’t wake up every morning and sing jingles at the top of our lungs while sticking logos all over our bodies.  Although it’s close.  Popular songs are now jingles, so I guess we do sing songs that have become advertising anthems, and of course, people have been paying money to wear corporate logos for some time now.  But the victory isn’t complete yet, and with any luck, it never will be.

When you see an ad from now on, think about what it says and how it says it.  Beautiful people high-fiving each other over Product X is not what how I want my culture defined.

Pervasive advertising is an assault on your judgement, treat it as such.

Google is having a beta release of Chrome, their new browser, tomorrow.  In a nutshell, the claim is that it’s faster, more memory efficient, more stable, and smells like puppies.

Famed comic guru Scott McCloud has helped them gin up a comic explaining why Chrome is cool.

I, for one, am dying to give it a spin.  Don’t get me wrong, I loves me some good old FF3, but I’m also a sucker for “better/faster/stronger”.

Read the comic here, and try it out tomorrow.

Respect is a Two Way Street

I don’t care which side of the isle you sit on, you should be able to applaud Senator Obama’s remarks to the media today, when he told the press to leave Sarah Palin’s family alone.

It sucks when people get so wrapped up in their own agendas that they stop acting like human beings, and start seeing everything in terms of attack vectors.  It is, frankly, plain jackassery.

Standing against this kind of thing instead of loading it into your smear campaign is even harder when you actually have something to lose by acting human.  So congrats, Mr. Obama.  You gave some respect where it was due.

That earns you some right back.  Good job, sir.

Everything That Happens Will Happen Today

David Byrne and Brian Eno’s new album, Everything That Happens Will Happen Today, is out at last.  Stream for free or buy it (buying is better, it encourages a next time) from here.