As most of you know, I love nerdy tabletop games.  I also love zombies.  A lot.

So, when I saw that Mayday Games had a Kickstarter project up for a swanky new zombie game, well, let’s just say I hadda get me some of that.  The project closed at nearly ten times the original goal of 5K, which is amazing.  Why?  Because, zombies.  That’s why. 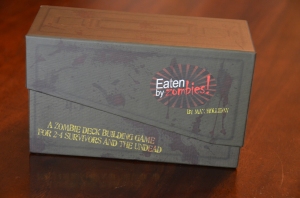 Looks like an ammo can. How awesome is that?

Here’s the game description from Mayday:

In the new game Eaten By Zombies! players strive to survive as the horde of the living dead make it their goal in Death to force you to join the crowd. You must work with or against the other survivors to be the last one standing. No not standing, cowering in the corner crying for their mommy.

In the spirit of AMC’s “The Walking Dead” and “I Am Legend”, Eaten By Zombies takes you into a dark world of eventual death. Every turn you must venture out from your safehouse and scavenge for Swag. But not so fast, the Undead have other plans for your brains. Every day a Horde of fresh zombies will be waiting for you, and over time the threat gets greater. Now it’s time for your “Fight or Flight” instincts to help you to survive just one more day. Using the swag you’ve got on you (ie cards in you hand) you must survive any way you can.

If you can get away or kill the Horde, you may scavenge the remains of the desolate suburbs for any Swag the neighbors may have left behind. With the right stuff and a few good friends to out run, you may just make it through this alive… well, no probably not. But being the last one to die a slow, painful death means you can claim sole victory!

With a set of over thirty different cards to start with, no two games will ever be alike. This game is a combination of Card Drafting, Hand Management and Survival Horror with a few dirty tricks thrown in.

I dunno, if that doesn’t sound great to you, then all I can say is that we’re very different people.

One of whom is very, very wrong.