Death of an Overlord

Our year-and-a-half long Descent campaign, Sea of Blood, is finally over.  And I lost.

<a moment of silence please>

In the end, reckless vandalism and pointy sticks were able to overcome wily persistance and peerless charm.  Here’s a pic of the ‘heroes’ attacking a helpless evil monarch: 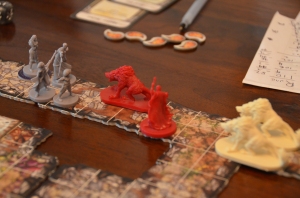 Despite being crushed into overlord jelly, the campaign was a blast to play.  Thanks to Erik and Cory for spending about a million monster-filled hours with me.

Since we’re moving on to Descent 2.0 when it launches soon(tm), this is probably the last time that this set will be played:

Farewell old friend.  You were magnificent.