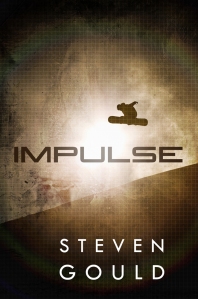 I’m not really a book review kind of guy.  Back in the day, before I put on my author pants, I would sometimes throw up an occasional opinion, even if that opinion wasn’t exactly positive.  But now that there’s the potential to have my shenanigans seen in a competitive light, I think public criticism of that sort is firmly out of bounds.

“But Mike,” you say out loud to your screen like a crazy person, “this is the third book!  I haven’t read Jumper or Reflex yet!  Am I totally boned?”  Not at all.  In fact, I envy you.  Not just because you’re so attractive and clever, but because you have the chance to enjoy these books for the first time.  You have to read all three in order, but it’s a Willy Wonka kind of challenge.  Oh no, I have to eat a bunch of delicious chocolate in order to win a prize!  Poor me!  If anything, you get an excuse to pick up three incredible books at once.

Cent has a secret. She lives in isolation, with her parents, hiding from the people who took her father captive and tortured him to gain control over his ability to teleport, and from the government agencies who want to use his talent. Cent has seen the world, but only from the safety of her parents’ arms. She’s teleported more than anyone on Earth, except for her mother and father, but she’s never been able to do it herself. Her life has never been in danger.

Until the day when she went snowboarding without permission and triggered an avalanche. When the snow and ice thundered down on her, she suddenly found herself in her own bedroom. That was the first time.

What this blurb doesn’t tell you is how vivid and compelling Cent’s coming-of-age story is or how she’s charming, reckless, and vulnerable all at once.  It’s also fascinating to reconnect with her parents, Davy and Millie, and see them struggle to raise a teenage daughter, especially in the context of being hunted fugitives.  One of the best things about the series is how thoughtful and interesting the characters are, and Cent in this book is no exception.

Jumper was, and continues to be, an inspiration to me.  Impulse is a worthy successor to its legacy.