I think it’s obvious by now that I really want to fly a spaceship.  I mean, duh, I’m kind of a huge nerd.  And by fly a spaceship, I don’t just mean dogfighting and banking turns in a vacuum as if I were flying a P51 Mustang in space (although, god help me, I love that, too).  I mean being part of a bridge crew and working together to not die in an expanding ball of plasma and velour uniform scraps.

For video games, I love Artemis.  For my phone, it’s Spaceteam.  And for board games, it’s Space Cadets.  Here’s what it looks like: 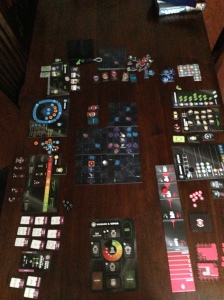 All party, no labels. 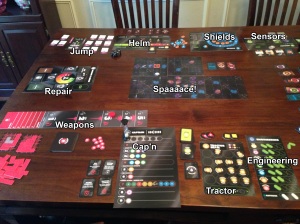 This is set up for four people, each running a couple of stations.  It plays 3-6 people, and for this game, the more the merrier.

In a nutshell, each player has a job to do in a 30 second window.  Before and after these timed windows you have plenty of time to discuss strategy, but when it comes down to getting your Spock on, you need to take care of business in short order.  Each of the stations is essentially a mini-game, which the player can become more skilled at over time.

This is the secret sauce of this game and the reason why I love it.  Unlike other games, *cough*Space Alert*cough*, your ship is actually not a piece of crap.  In fact, with a skilled bridge crew, you can be really friggin’ powerful.  The crew of the USS Hull Breach never managed any real level of badassery, but it was totally possible.  In this game, player skill trumps all, which makes it incredibly addicting.

If you’re interested in how the stations work, the game designers put up some fantastic short tutorial videos for each.  Here’s the one for operating the helm:

None of the stations are particularly complex, but each one presents just enough of a challenge that you’re going to see a wide range of success in your thirty second window.  Hats off to the Engelstein brothers who designed this game, it’s pure genius.  A novice weapons officer can get the basic job done, loading and firing a torpedo for a bit of damage, but a master can load a spread of three, maybe even four torpedoes and wipe out all the enemies in a sector.  The same holds true with pretty much all of the stations.  Moreover, since many of the stations have a direct impact on the others (sensor locks increase damage, helm and shields work together to present an effective defense, etc), a strong officer winds up helping the entire ship.

If you have any interest in this kind of thing, and you should, then I recommend you pick this one up.  Especially if you can put together a regular crew.  While fun at a party or occasional gaming session, this one strongly rewards continued play.

As usual, here’s the clever and handsome Tom Vasel with a video review where he totally agrees with me: