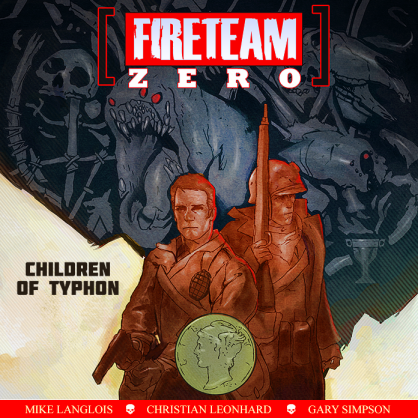 You know what the worst part of having a secret project is?  The grueling work?  Piece of cake.  The agony of choosing between all the cool things you want to do and the things you actually have time to do?  Harder, but still no.  The hiding under a tarp in the hall closet until your wife threatens to turn off the wifi?  Almost.  For me, it’s keeping my big trap shut about the whole thing for nearly a year.

Fortunately, that’s no longer a problem.  It’s announcement time, baby.  Let’s do this.

Fireteam Zero is a tactical miniatures board game that takes place in the Emergent Earth universe.  Here’s what it says on the back of the box:

In 1942, four soldiers vanished from the training program of the newly formed First Ranger Battalion, their names stricken from the roster. Chosen for their unique skills, they would fight in secret against terrifying supernatural enemies and overwhelming odds. This is their story.

Fireteam Zero is a cooperative game for up to four players who must cut a path through an endless swarm of deadly monsters in order to discover and defeat the ultimate evil behind them. Each player possesses a set of brutal combat skills that are represented by a deck of cards unique to that character. Play cards to devastate the creatures in your way, help your teammates survive the onslaught, or even reshape the tactical landscape with the proper application of explosive ordinance.

The battle is fought across three maps of increasing difficulty, each one bringing more and tougher enemies than the last. Players must search for and complete mission objectives in order to progress and bring them one step closer to the final showdown.

Aiding them are two NPC Specialists, one with an uncanny ability to sense the location and nature of the supernatural energy in the area and another with an encyclopedic knowledge of the arcane. Use the Specialists wisely or risk failure no matter how many monsters you defeat.

Race against time as the creatures on the board become stronger and more cunning. The longer you take to complete your objectives, the more Monster Twist cards are revealed, each granting a new and terrible aspect to your enemy. In each set of missions you will face a different family of horrifying creatures, each with their own special abilities and twist cards.

Players must not only fight for their lives, but at the same time they must make smart tactical choices with their teammates in order to make the best use of a limited resource, the cards in their hands. Each card not only represents an action that they can take, but also their health. Spending too many cards can leave you vulnerable, while spending too few can result in being overwhelmed. Clever players will rely on each other to succeed.

Fireteam Zero is a story-rich board game of squad tactics and horror. Each map can be played separately in about 45 minutes or together to complete an entire Operation in about 3 hours.

That’s…a lot of words.  What is it really?

Basically, you get to find out what Abe and his squad got up to during WW2.  Each player will become a member of Fireteam Zero and commit acts of badassery against different families of monsters while trying to capture or destroy the arcane artifact that’s creating them.

Each player has a hand of cards that represent both the monster-stomping actions they can take and their current ability to deal with threats.  Run out of cards in hand and you get to enjoy a quiet dirt nap.  And the whole shebang takes place on a giant board filled with large, fantastically detailed miniatures.

Did you say miniatures?

I totally did.  Here’s an example: 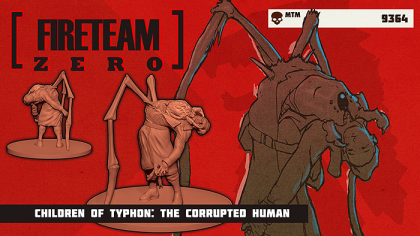 Don’t worry about the monster legs and this bitey head thing. It’s just my allergies acting up.

Monsters come in three types: minions, elites, and bosses.  A minion is about human-sized, represented by a standard 40mm tall figure.  Elites come in at 50mm, and bosses hit a whopping 60mm in height with a proportional increase in girth.  The charming fellow pictured above is an elite: the Corrupted Human in the Children of Typhon family.  Here’s a bit about him:

Division Zero Record Number 9364: Corrupted Human
A human being that has come into contact with liquid from the Cup of Typhon [see artifact record 9110]. Class 2 mental and physical aberration occurs immediately, with violently aggressive behavior and physical deformities characterized by razor sharp insectile legs, mouthparts, and even additional heads.

FTZ Field Notes: These bastards can tear an unprotected man in half with no particular effort and are as hard to kill as they are ugly. Engage at a distance. And with as many explosives as you can carry.

Our miniatures are being created by the amazing Chris Deavellar, whom you may know from his 3D work on the MMO, Fallen Earth.

Sounds like you got lucky.  Who else is working on this?

As a matter of fact, everyone involved has some pretty serious gaming chops.  The design of the game itself is by Christian Leonhard, who happens to have a couple of international game design awards under his belt.  Pretty much the only reason he agreed to work on this project with me is that we’ve been friends for years and I totally know where he buried all those hobos.

The art, layout, and graphic design work is being done by renowned game artist Gary Simpson.  If you’ve ever played Summoner Wars, then the artwork you were ogling was Gary’s.  I have no idea why Gary agreed to join up with us, except that it was probably easier than getting a restraining order.

Together we formed Emergent Games and vowed to create kick ass tabletop experiences or die trying.  Christian and Gary don’t actually know about that last bit yet, but I’m sure they’re cool with it.

Okay, this game thing checks out.  As your loyal blog reader, how can I help?

Spread the word.  If you’re a fan of board games, hop on over to Board Game Geek and give us a like.  If not, point your gamer friends to this post.  Anything that gets the word out before our upcoming Kickstarter campaign would be amazing.

In return, help yourself to some free books!  The Emergent Earth novels that this game is based on are free through Wednesday the 6th!  Get Bad Radio here and Liar’s Harvest here.  Tell your friends and hook them up with some free books at the same time.

Stay tuned for more posts where I go into detail about the theme, combat system, monster families, and more in the weeks ahead.